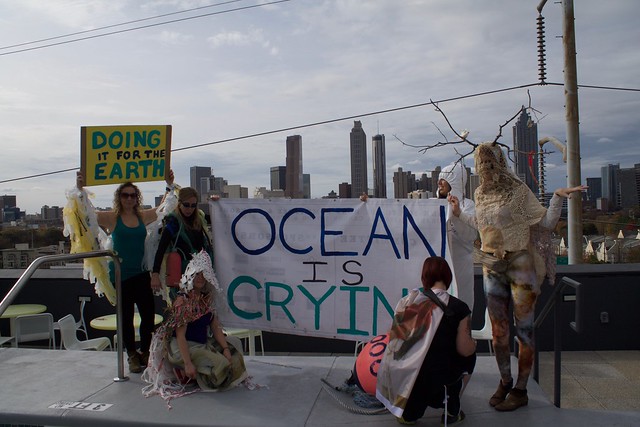 On November 29th over 550 participants descended upon Atlanta for the People's Climate March Atlanta. The march, part of the Global Climate March led by the People's Climate Movement and Avaaz, is in anticipation of the COP21/CMP11 Climate Talks in Paris that begin November 30th. Demonstrators in the march are demanding action for climate change from local and world leaders. Lead Organizer, Lauren Reef (MDP ‘16) says “this event was possibly the largest climate mobilization in Atlanta's history to date”. The event brought in marchers from all over the Southeastern United States, including notable figures and organizations, such as Senator Vincent Fort, local environmental icon Captain Planet, The Sierra Club, Environment Georgia, Citizen’s Climate Lobby, and the Emory Graduate Sustainability Group. Before the march, the new Sustainability Director for the City of Atlanta, Stephanie Stuckey-Benfield, spoke about the importance of the march for climate action worldwide, and speakers from indigenous networks gave talks as well. The event was sponsored by several donors including The Turner Foundation, and the US Climate Action Network. Other Emory MDP students who helped organize the event, include Katie Hiebert (‘16) and Alex Gordon (‘17). The event ended symbolically against the backdrop of the National Center for Civil and Human Rights in downtown Atlanta. Referring to the rich diversity of the marchers, the lead organizer Lauren Reef explains “Climate change has a disproportionate impact on low-income individuals. Having speakers from the Civil Rights Movement and listening to them talk about social justice and climate justice in the same breath brings a lot more credence to the movement”. To learn more about the event visit the event page.